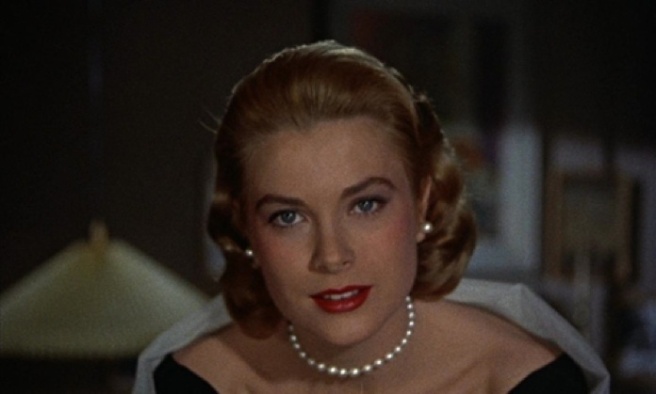 I’ve watched Hitchcock’s Rear Window more times than I’d like to admit. My obsession has more to do with Grace Kelly’s clothes in the film than anything else. I’ve spent hours pouring over analyses of Edith Head’s costuming in film since I first saw the infamous close-up of Kelly leaning in to wake the incapacitated Jimmy Stewart with a kiss. The story that follows is that of Lisa Freemont and LB Jefferies, “a beautiful young girl and a reasonably healthy young man,” as his nurse Stella calls them. The very Hitchcockian tale unfolds into how a menial fixation with observing his neighbours while healing a broken leg, spirals into a suspenseful mystery.

I’ve never thought much of the gender dynamics in the film, because 1954, but for some reason last night I got to stewing.

The film begins with LB explaining to Stella that his socialite girlfriend Lisa is wrong for him. He says he needs “a woman that’s willing to go anywhere and do anything and love it,” feeling she simply isn’t so. A few scenes later, something about the way Lisa’s heart sinks in her eyes as LB eye rolls, “It’s perfect … as always,” when she asks about dinner. This oft-occurring dynamic, one of two lovers “trying too hard” is written all over Jefferies’ face. He’s frustrated with her, annoyed even. The evening ends with a tiff, LB asking, “wait, well when am I going to see you again?” suddenly realizing he may have pushed her too far.

Dude, this beautiful lady wined you up and brought a fucking lobster dinner to your doorstep. What is wrong with you? Lisa grows a pair and coldly replies “not for a long time.” Soon as you’re thinking yes, hell yes! Let him sit in his pathetic one-legged squalor! She turns on a dime with “at least, not until tomorrow night.”

What if things had been different? What if I pretend to be Edith Head, I thought, thinking ever so highly of myself? Since Kelly’s costumes in the film are so successfully a visual accompaniment to her evolution inside her and LB’s relationship, what if I made a fan fiction version where she leaves his ass? Hitchcock said she “was to look like a piece of Dresden china, nearly untouchable.” What if she wants to be broken? And here we are: a play-by-play of a re-imagined version of Grace Kelly’s costumes as message to LB Jefferies in Rear Window. 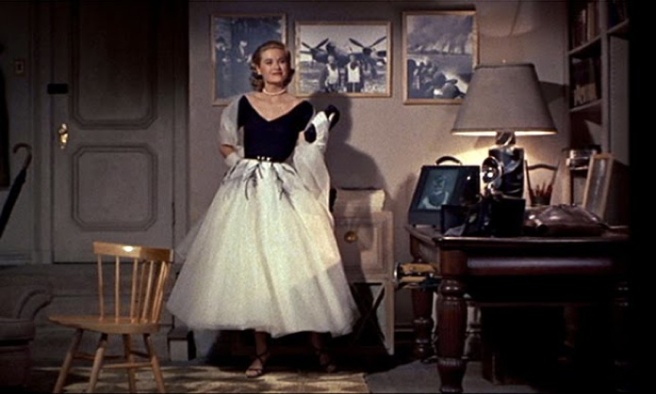 You feel me? The only thing I add to this look is a cigarette for her to light before throwing the match on LB’s floor and exiting without promise of return. 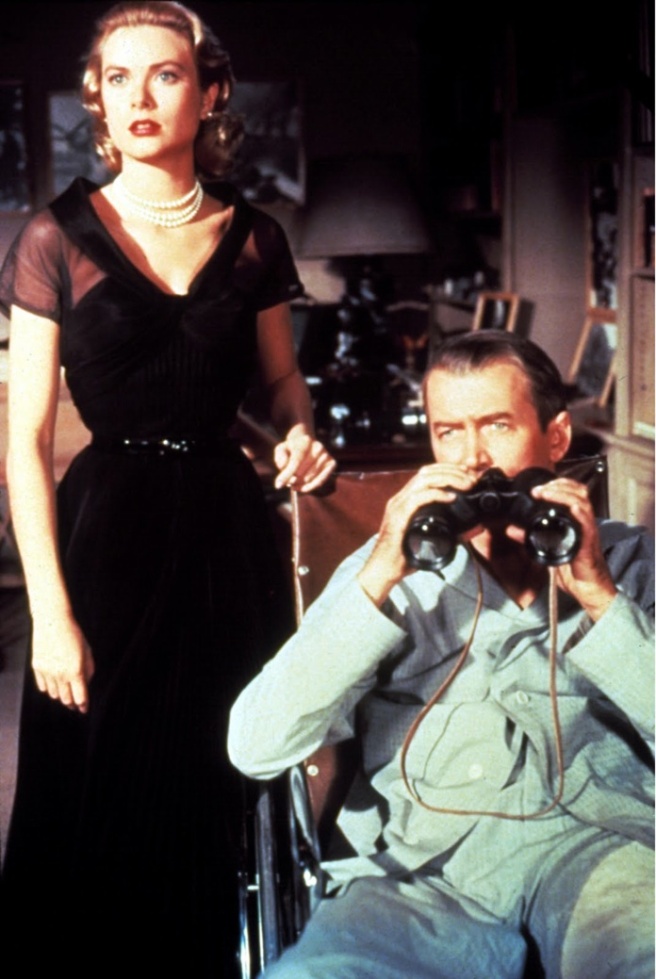 … so she has to return because she’s the female protagonist, but not because she wants to. I remember being infuriated even as a 9-year-old watching this scene. Even then I understood that a lady sitting on the lap of the one she desires, begging for attention, ain’t right. KISS HER YOU LOINLESS FOOL. This time when she comes back, I keep her in black, but go for something like the Shivan and Narresh Cut-Out Fontana Cruise Gown. The neckline keeps to the 1950s sensibility, but from the bust downward shows LB everything she’ll never let him touch again. Topped with a white fur stole. 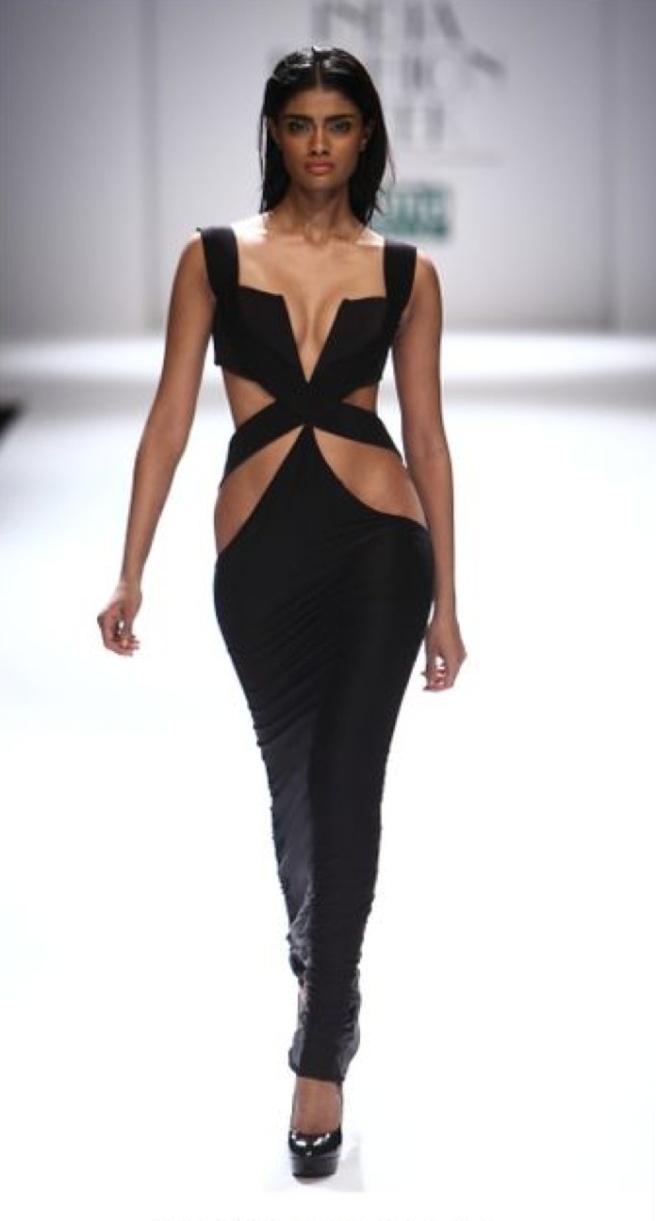 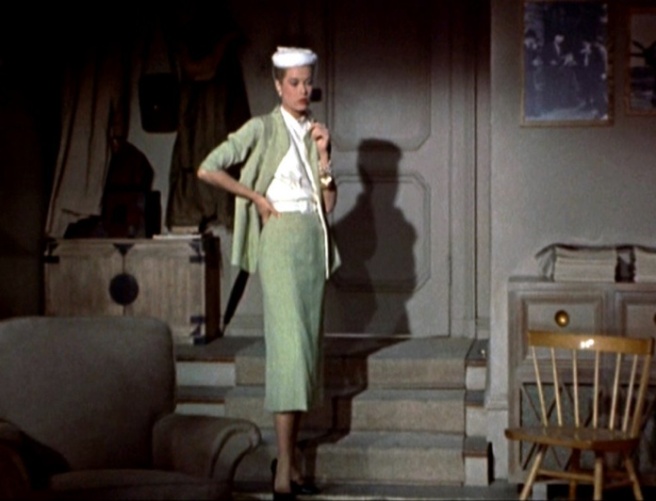 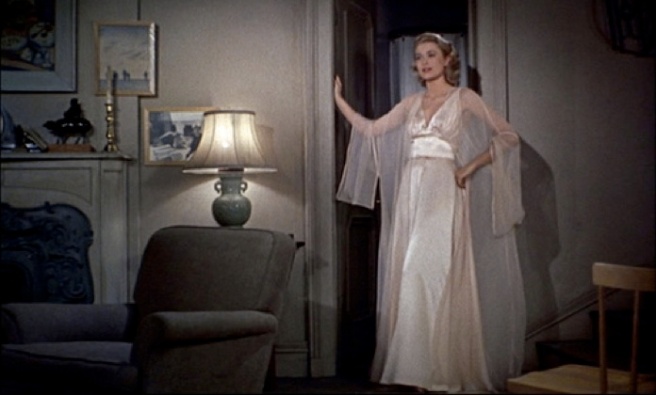 Loving the idea of a halter underneath her suit here. Can’t fight the power of an unveiling scene. Small acts of seduction come in her peeling off her gloves and un-pinning her hat. In fact, the whole film shows her endlessly trying to seduce LB. Unfourtunately he’s occupied as all hell with the potential murderer living across the concourse. She steps up her game by bringing a change of clothes in a Mark Cross mini-suitcase in this scene. When the most you’ve been getting is a daily circulatory-boosting tonic rubdown from a middle-aged insurance company nurse, one would think LB would be a little more receptive to the demure archangel of beauty emerging from his bedroom in a negligee.

My Lisa, a member of The Pack, opts for this Dior S’14 Couture pantsuit instead. 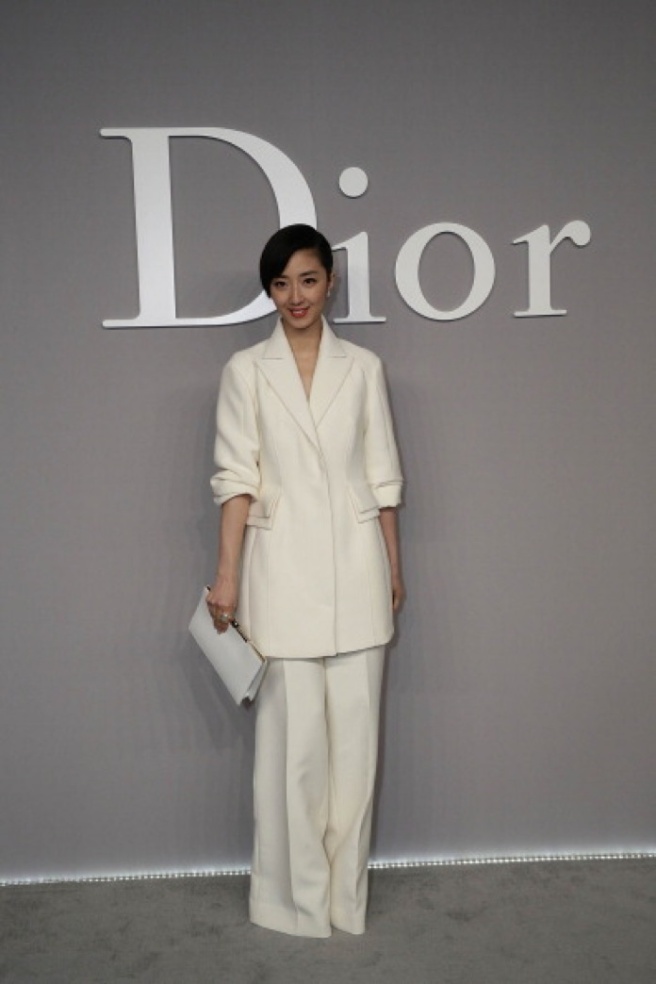 She keeps the pearl choker, veiled hat, and badass jangly bracelet. That bracelet says, “I’m here.” Ripping off the suit, she has forgotten the nightgown and opts for the Matilda corset with suspender belts by Agent Provocateur. After stepping into the light and swerving her hips towards LB, she throws his drink in his face and swathes herself in a silk kimono, shimmies down the pipe, and struts to the bar across the street. 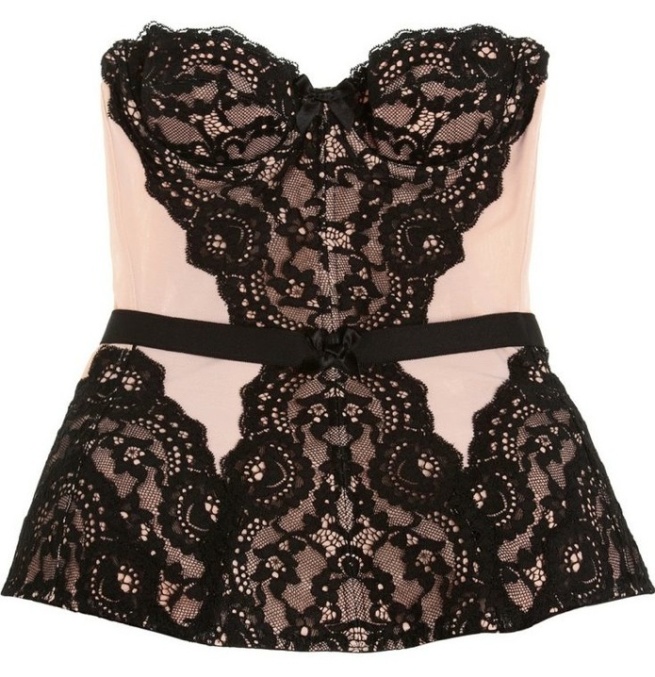 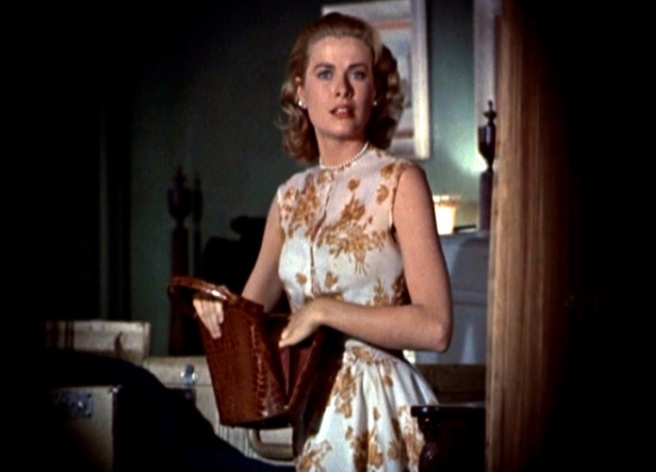 This dress is feminine as fuck. I know she’s supposed to seem vulnerable, fearlessly foolish here. To equate that with femininity in new Lisa’s eyes would be sacrilege. If we’re dreaming, we’re dreaming, so in this world she’s ahead of her time. For her pivotal scene, slipping through the window into murderer Lars Thorwold’s apartment she wears this 1960s inspired Carven dress, fur cuff, and boots for ease of break-in. She evades arrest by making eyes at an officer. He helps her put on her Prada shearling before driving her home. 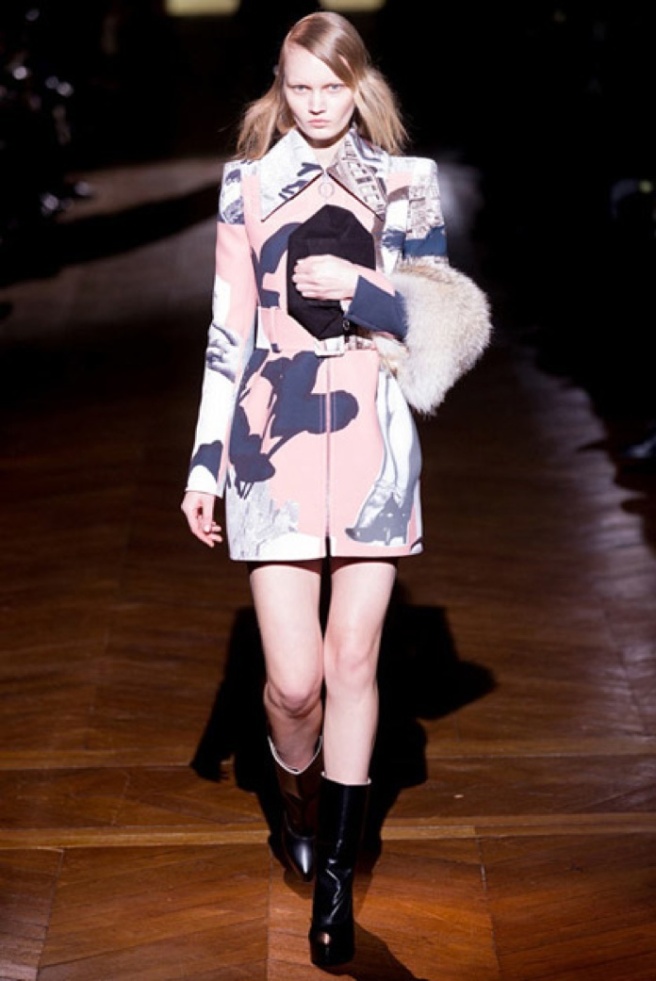 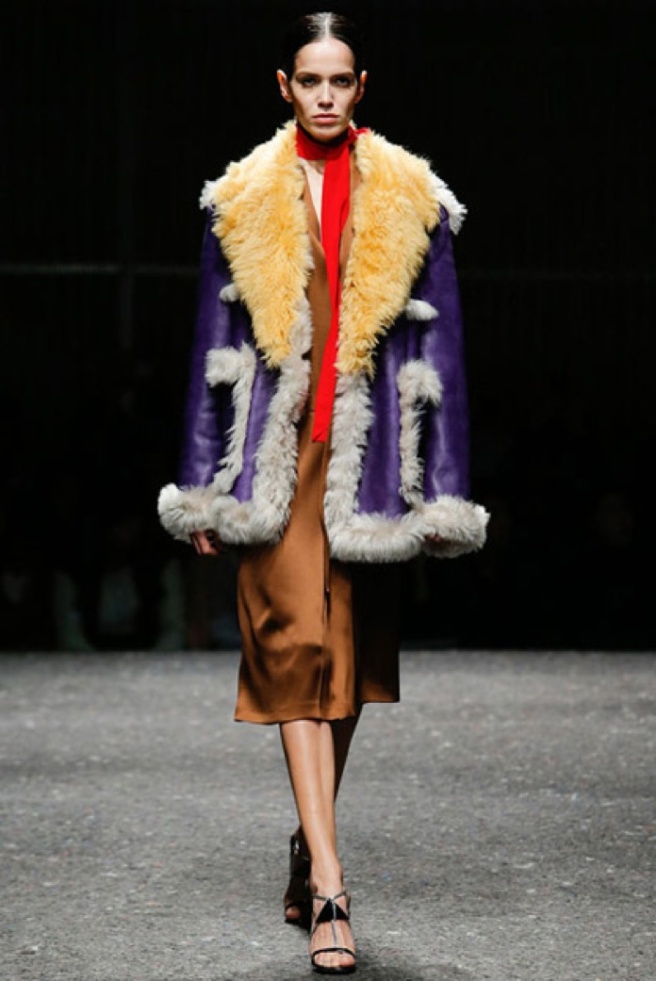 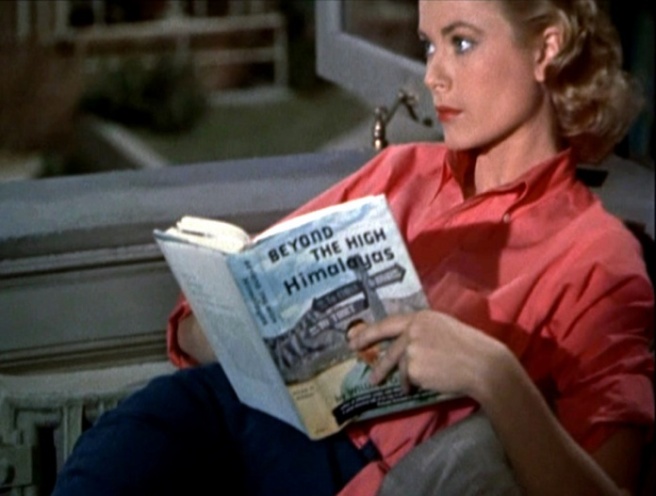 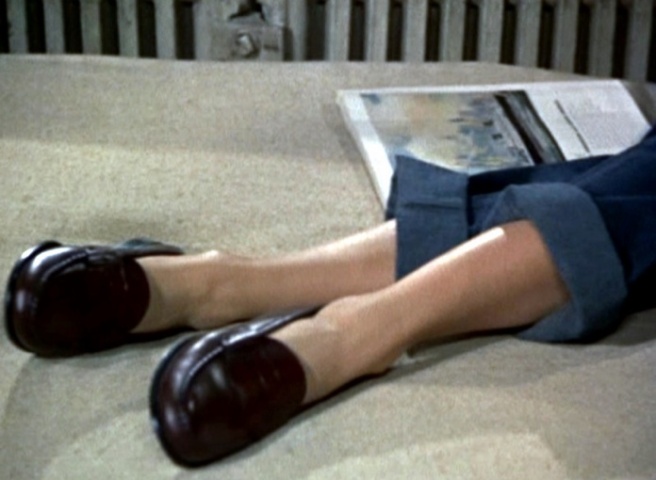 Dark brown loafers and a sporty look are meant to show the audience, sigh, she is his type after all. She’s enough for him now. But the curtain drops for us only after Lisa moves into the now-empty apartment across the way from LB, her diamond choker blinding him while he heals from his newest leg break. Forever doomed to watch her thrive. While movers fill her apartment with furniture made from raw pearls, she climbs on the roof wearing Rihanna’s Stella McCartney look from Met Ball and is picked up by a helicopter driven by Sophia Lauren, flying into the night. 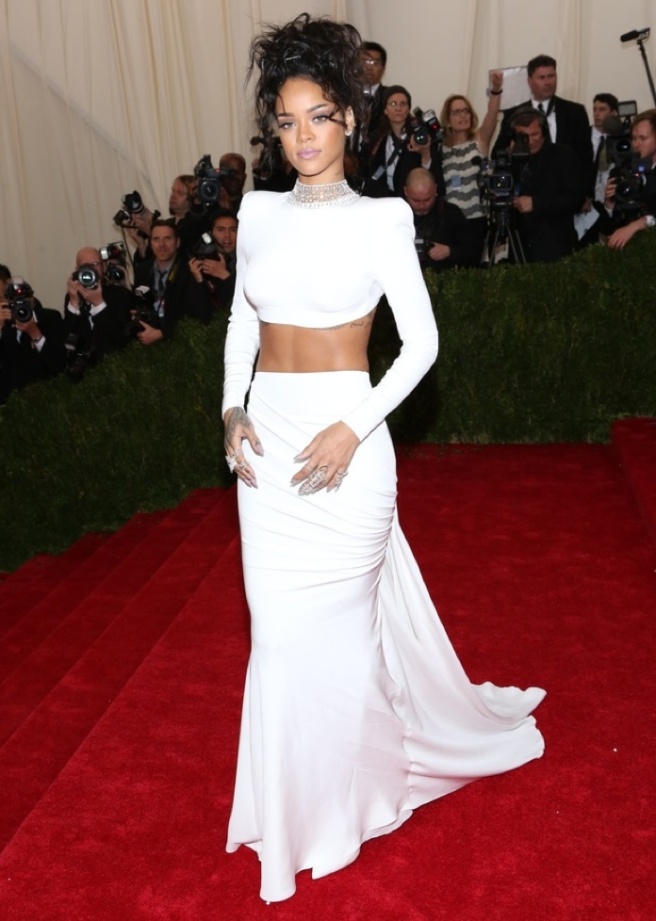 Jefferies, you stay a dim-witted sod and Lisa becomes immortal, goes on to become Karl Lagerfeld.